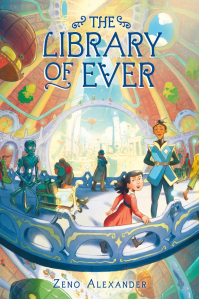 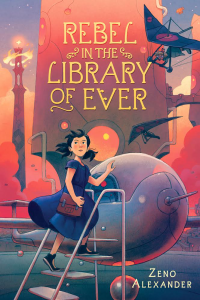 I am the authorized biographer of the famous young librarian Lenora, whose many adventures through time and space I am chronicling in The Library of Ever series. As I make my own appearance in the books, I would be spoiling much if I said more.

With her parents off traveling the globe, Lenora is bored, bored, bored―until she discovers a secret doorway into the ultimate library. Mazelike and reality-bending, the library contains all the universe’s wisdom. Every book ever written, and every fact ever known, can be found within its walls. And Lenora becomes its newly appointed Fourth Assistant Apprentice Librarian.

She rockets to the stars, travels to a future filled with robots, and faces down a dark nothingness that wants to destroy all knowledge. To save the library, Lenora will have to test her limits and uncover secrets hidden among its shelves. 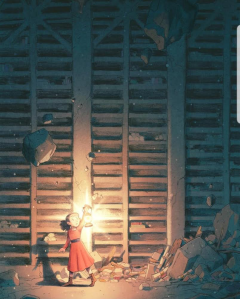 The Library of Ever was named one of Kirkus Reviews best books of 2019.

Rebel in the Library of Ever continues Zeno Alexander’s acclaimed middle-grade fantasy series with a dangerous takeover of the magical Library as our heroine fights to make knowledge free for everyone.

Lenora returns to the magical Library―which holds every book ever known on its shelves. But she discovers the Library is under new management, its incredible rooms and corridors turned dark and sinister.

She quickly connects with a secret resistance that’s trying to free knowledge from the shadows threatening it. Her new friends introduce her to an ancient lost city, hang-gliding, and mathematical beings larger than the universe itself. And they help her face the mysterious Board of new leaders―who are leading the Library into darkness.

Now it’s up to Lenora to prove that knowledge is always more powerful than ignorance and fear.

I am reluctant to give any spoilers, but suffice to say I have long been mesmerized by libraries and their long history, dating back thousands of years, and when I met Lenora – I knew I must write about her.

What was your favorite scene or part of your book to write?
I had a great deal of fun writing so many scenes, from Lenora being trapped on a gigantic globe, to traveling to the year 8000, to finding herself at the controls of a glider she has no idea how to fly.

Many books have inspired me over a long period of time, but some of the more recent inspirations include fantasy and science fiction authors like Diana Wynne Jones, Joan Aiken, PL Travers, Madeleine L’Engle, CS Lewis, and too many more to list.