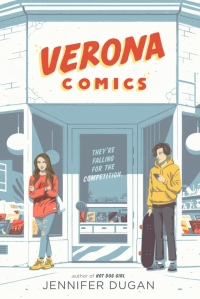 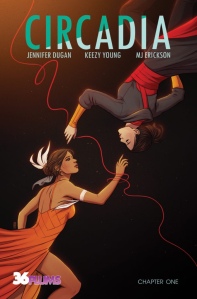 My name is Jennifer Dugan, and I’m the author of the YA novel Hot Dog Girl and the comic series, Circadia, both out now. My next young adult novel, Verona Comics, releases April 21.

While I always wanted to be a writer, I didn’t start seriously writing until 2009 (and most of those early novels should stay locked in a drawer!). I tend to write the kind of stories I wished for when I was growing up: stories about queer characters, complicated family dynamics, and teens who are a bit of a mess trying to figure out life—and themselves.

I’m so grateful for everyone that has taken the time to read my work and found themselves connecting with the stories. Your positive emails, posts, and tweets mean so much to me!

Verona Comics is a Romeo and Juliet retelling set in the comics industry. It follows Ridley and Jubilee as they navigate identity and first love while their families’ dueling businesses—an indie comic store and a big corporate franchise—battle around them. I also explore some serious mental health themes, including the impact that anxiety and depression can have on relationships… but don’t worry, there are plenty of cute, light moments too!

As a bi woman married to a man, I really wanted to write a queer love story that featured characters of different genders. There is so much biphobia, both within and outside the LGBTQ community, that I really wanted to demonstrate what a queer relationship between a boy and a girl might feel like to the people inside it. Ridley is comfortable with his sexuality, but Jubilee really struggles with feelings of “am I still queer if I like him?” I hope that Verona Comics can help anyone struggling with those feelings realize that you are not defined by whomever you’re dating at any particular moment.

This is so hard! There were so many! I love their first meeting on the way to comic-con prom, which Penguin Teen helpfully released in an excerpt already. But I have to say the text messages between Ridley and Jubilee were by far the most fun to write! The text messages themselves run the gamut from heartwarming, to ridiculous, to heart breaking, and it was such an interesting challenge to capture those emotions without being able to rely on body language or inner monologues at all.

Growing up, I was obsessed with the Sweet Valley Twins/Sweet Valley High stories… and I also fell in love with Stephen King’s books at a young age. So, I’d have to say they were probably two of my biggest inspirations when I was a baby writer. But it’s really books that are coming out now that inspire me to keep going! Some of my recent favorites are Today, Tonight, Tomorrow by Rachel Lynn Solomon, The Falling in Love Montage by Ciara Smyth, and This Coven Won’t Break by Isabel Sterling. They all really recharged my batteries and kept me feeling both entertained and inspired. I think it’s really important as creatives that we take time to “refill the well” by reading and consuming other forms of media.

I would say to go for it! There will never be a “perfect time” to query agents or go on sub with a project (although there are definitely wrong times, so always read guidelines before sending anything in!). Don’t worry about trying to follow trends or finding just the right moment to jump in. Write the story that calls to you and go from there.

Also, revise, revise, revise! I encourage new writers to find critique partners and beta readers and to be open to feedback. You want to put your best foot forward, and one of the ways to be sure you’re doing that is to give some outside eyes a chance to read it and react.

Don’t miss out on Jenn’s Preorder Campaign which runs until April 30, 2020 https://jldugan.com/young-adult/verona-comics/