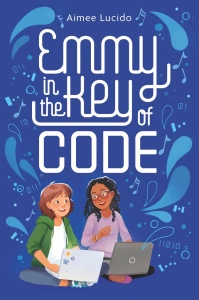 What would you like readers to know about you?
Something I would like readers to know about me is that in addition to writing books, I also make crossword puzzles! I’ve been doing it for about a decade now, and I publish work for many different publications, including The New York Times, The New Yorker, Crosswords With Friends, as well as some incredible indie crossword publications, like The American Values Club Crosswords (whose name is a parody of The A.V. Club from The Onion, which is where the puzzle grew out of, many, many years ago).

What is your book about for those who haven’t read it?
EMMY IN THE KEY OF CODE is about a twelve-year-old girl named Emmy who comes from a family of musicians but, in spite of her best efforts, she feels like she isn’t very good at actually making music. So, when she moves to San Francisco for her dad’s job, she decides she’s no longer going to take music classes anymore. Instead, she’s going to try something random: computer science. But she surprises herself with how much she falls in love with the language of code, relating to it almost as a musical language. Not only does she find her passion in code, but she finds a new best friend, too, named Abigail. But, as time goes on, she learns that Abigail isn’t being entirely honest about their friendship, and on top of everything, her new favorite teacher, Ms. Delaney, is harboring a terrible secret.

The book is written in verse, a la THE CROSSOVER, but as Emmy and Abigail learn different coding concepts, the language of the verse starts to incorporate the language of code.

What has been your inspiration for writing it?
My inspiration for writing Emmy was originally THE RED PENCIL by Andrea Davis Pinkney. That book is also written in verse, has absolutely nothing to do with coding, and yet, when I was reading it, all I could think about was how much the poetic style of the book mirrored the coding language Python. Something about how the author ascribed meaning to things like tabs and newlines and punctuation made me think of code. I realized how similar poetry and code can be: they are two things that people are often intimidated by, even though in both cases they’re just forms of English. Both poetry and code can be learned and taught, understood and misunderstood, but both don’t have to be nearly as scary as people often think they are. I wondered what might happen if I wrote a book about code using poetry, that taught code as a poetic device. Maybe that could help people understand that code, which is often thought of a robotic and “mathy,” can actually be beautiful, artistic, literary, and musical (which, by the way, math can be, too).

What books or authors inspired you to become a writer?
When I was very young, just learning to love reading, the books that pulled me in were often fantasy. Things like Matilda, Harry Potter, and The Golden Compass. But as I got older, the books that inspired me the most were smaller stories, more character-driven, contemporary, realistic. The books that inspired EMMY were The Crossover, The Red Pencil, Ms. Bixby’s Last Day, but every book I write is inspired by different books. Most recently, I’m feeling inspired by The List Of Things That Will Not Change, Coo, and Guts.

What advice would you give to aspiring authors who want to write a book
My advice would be to write a book! There is no substitute for sitting down at your computer and cranking out words. There is no class you can take, no editor you can hire, no critique partner you can send your work to that can substitute for sitting your butt down and writing words. It’s unfortunate, but it’s true. they discuss philosophical questions around AI and randomness, and they learn about coding languages beyond Java, which is what they are taught in their regular class. I love these scenes because it reminded me so much of my own computer science education growing up, and I feel like it shows how versatile a computer science education can be. We think about school subjects as existing in silos, never considering how art and computers can go together, or philosophy and robotics, or history and technology. But in reality, none of these subjects can exist without any of the others.